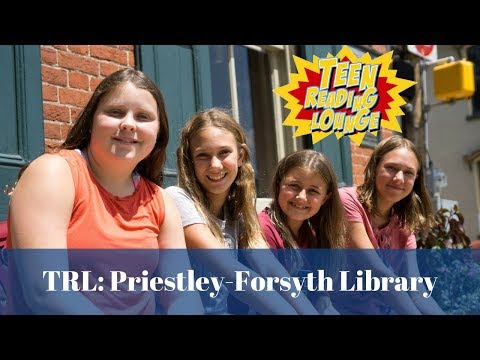 Days after a gunman opened fire at a Parkland, Florida school in February, killing seventeen students and staff members and injuring seventeen others, the Teen Reading Lounge group at the rural Priestley-Forsyth Memorial Library in Northumberland met to discuss Alice's Adventures in Wonderland. “The students shared that they felt like Alice, tumbling down a rabbit hole into a world they didn’t understand,” said Youth Services Coordinator Kim King. The stories and the conversations that were sparked helped the teens process their feelings of helplessness, frustration and anger. They also led to larger discussions about school safety and the need to address problems faced by young people.

Constructed in the early 19th century as a two-story home, later to be a tavern and then a medical office, the Priestley-Forsyth Memorial Library was finally established in 1925 and was added to the National Register of Historic Places in 1981. Its cozy, book-packed corridors and quirky mix of antiquarian architecture and modern amenities have made it an ideal setting for teens, some who experience social anxiety at school or have learning differences, to feel safe exploring books together and diving deep into sensitive personal and political issues. For some of the teens, the experience has played a big role in their social development.

“[Teen Reading Lounge] is a good way to go out and actually meet people and discuss things that you otherwise probably wouldn't discuss,” said Kendra  Harter, an eighth grader at Shikellamy Middle School. “I went from being really socially awkward and an introvert to not being as much of an introvert.”

With the support of the Pennsylvania Humanities Council, Teen Reading Lounge was established at the Priestley-Forsyth Memorial Library in 2014. The current facilitator is Renee Albertson, a certified Reading Specialist, who takes special care in giving individual attention to students’ reading needs and letting them develop their own community guidelines to govern the space. She also supports the teens’ civic engagement ideas that are inspired by their readings -- recent projects have included a food drive, helping rescue dogs and cleaning up public spaces. Albertson excels at helping young people make meaningful connections between literature and contemporary issues. When the Parkland shooting happened, she found that the dissociative prose of Lewis Carroll, and Alice's bewilderment in Wonderland,  helped the teens express their own confusing torrent of feelings.

Kim King has noticed participants in the program reporting significant improvements in school and even stopping by the library on their own to pick up books for personal reading. It was in the aftermath of the Parkland shooting tragedy that she became convinced of the power of Teen Reading Lounge to create a supportive and relevant environment. “It’s a great way for libraries to reach all kinds of kids but especially those that are on the fringes,” said King. “There’s so much more that comes out of Teen Reading Lounge than reading a book.”

Teen Reading Lounge is made possible by a grant from the Institute of Museum and Library Services as administered by the Pennsylvania Department of Education through the Office of Commonwealth Libraries, and the Commonwealth of Pennsylvania, Tom Wolf, Governor. Additional support is provided by the National Endowment for the Humanities.